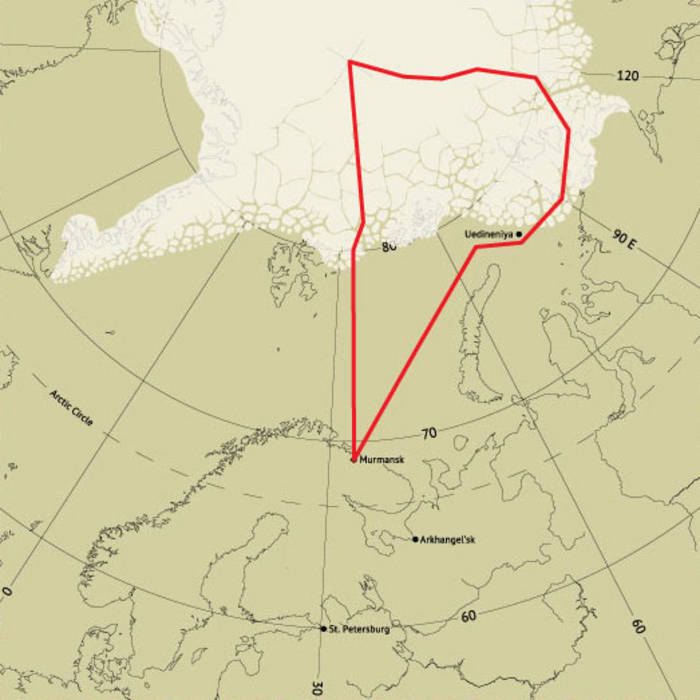 Dark Drone Ambient.
Red Meridian is conceptual soundtrack for unique video made during one of the first arctic expeditions.
The idea to create this album appear when author find 8-mm record belonging his old kin Sergey Borisov. He was a seaman, polar explorer and sailed on the first atomic icebreakers "Arctic" in mid-20th century.
The main concept of this album is making the atmosphere of infinite cold and very long days during travels in ices and reminding listeners about places very dangerous for people. For this reason the album has been named Красный Меридиан (eng. – “red meridian”) – dangerous line, the place for strong spirit people.
Uedineniya Island is located in the central part of Kara Sea, the project was named after it. The island was discovered by the Norwegian explorer captain Edvard Johannesen during travel by schooner Nordland at August 26, 1878. The captain gave the name Ensomheden for this island. Russian flag has been lifted above island in 1915 by Otto Sverdrup during expedition on the Eclipse bark. Later, September 7, 1934, polar station on island had been based by expedition on Sadko (captain: A.K.Burke) and Yermak icebreakers. This station worked till 1996.
Album consists of 8 long tracks of buzzing oppressive drone ambient with cold and dangerous atmosphere. Hollow and massive soundscape full of whispers, murmurs, scratches, flips and echoes.
There are three version of album exist: single CD in digisleeve; double CD in digisleeve where secong CD contain the very archieve record of arctic expedition and finally double CD in box with big pack of inserts - compas, part of original 8-mm film, emerengency water pack for marines.